Archeologists believe this area was occupied as long ago as 5,500 BC. However, without any evidence of permanent dwellings, it appears the area served only for seasonal hunting and gathering camps. A few artifacts and petroglyphs found around the park indicate the presence of more recent Shoshone groups, including the modern Southern Paiute. It is important for all visitors to know that State and Federal laws protect all artifacts and rock art. They should be left undisturbed for future generations to enjoy.

Mormon pioneers settled in this part of Eastern Nevada around 1864. Local Paiutes showed them silver ores, and their name for the rock “Panaker,” was used to name the town Panaca. In the late 1860’s a smaller smelter and mill were built in Dry Valley, not far from Echo Canyon. The small tent camp was called Moodyville and boasted a population of sixty in 1872. A severe windstorm destroyed the camp in 1873 and nothing remains of the site. Farmers and ranchers permanently settled Dry Valley by the late 1870’s. Today, alfalfa is the valley’s primary crop, seen growing in the fields below the dam.

Agriculture continues to be an important factor in Lincoln County’s economy, and was the reason for the construction of Echo Canyon Dam. Built in 1969-70, the dam was developed by Lincoln County for water storage and flood control, with a side benefit of water-based recreation. After completion of the campground and group use area, the Division of State Parks assumed operations in 1970. The 65-acre reservoir is stocked with rainbow trout by the Nevada Division of Wildlife. Other fish include largemouth bass and crappie, and an occasional German brown trout may be caught. The 1800-acre park is open year round and visitors may purchase gas, groceries and fishing licenses in Pioche.

Echo Canyon is situated at the head of Dry Valley, one in a series of valleys along Meadow Valley Wash. Emptying into the Muddy River near Moapa in Clark County, Meadow Valley Wash eventually reaches Lake Mead near Overton. Although part of the Colorado River watershed, the park’s environment is typical of the Great Basin desert and riparian life zones.

The reservoir attracts a variety of waterfowl and shore birds including mallards, teals, herons, avocets and the infrequent yet beautiful trumpeter swan. Eagles, hawks, songbirds, ravens, and roadrunners inhabit the canyons and valleys.

Common animals include squirrels, cottontails, jackrabbits, coyotes, deer, skunks and an occasional bobcat. Deer are seen in the early morning, as they come to the lake for water. Several species of lizards and snakes also inhabit the park.

Single-leaf pinion pine and Utah juniper are the predominant native trees at the park. Ash, Russian olive and ponderosa pine have been planted for shade. Cottonwoods, willows, duckweed, watercress, cattails and other riparian plants flourish along the canyon stream. Sagebrush covers the hillsides, with cactus and narrow leaf yucca also present. Wild current grows in the backcountry canyons.

Volcanic activity 45 to 125 million years ago formed many of the rock outcrops visible in the park today. The cliff walls of Echo Canyon are composed of tertiary basaltic lava flows; the badlands north of the reservoir are comprised of volcanic ash-flow tuffs. Alluvial gravel and pinkish clay formations formed later, resulting from a vast lake that covered this area about a million years ago. As it dried, veins of chalcedony, or desert rose, were exposed and are abundant in the area.

Echo Canyon State Park is one of five state parks located in Lincoln County and is a popular area for camping, fishing, hiking and enjoying the beautiful scenery of eastern Nevada. It is located twelve miles east of Pioche, via State Routes 322 and 323, and is only about twelve miles from the Nevada-Utah border. The park ranges from an elevation of 5,200′ to 5,600′.

The climate of the area is arid, with hot summers and cool winters. Summer temperatures range from 85º F at midday to 45º F at night. Rainfall is variable and thunderstorms are common. Although the park is open year-round, visitors should be aware of colder temperatures and occasional snow in winter months.

Camping: The campground has 33 campsites open on a first-come, first-serve basis. Drinking water is available near each site. Other campground facilities include flush toilets and a RV dump station. A camping limit of fourteen days in a thirty-day period is strictly enforced.

Hiking: The Ash Canyon trail leads into the park’s backcountry and a vast area for exploration. The 2.5-mile trail begins in the upper campground, climbs eight-hundred feet in one-third of a mile to the valley rim, and descends into Ash Canyon. It joins the highway in Rose Valley near the eastern park entrance, and returns to the campground through Echo Canyon. A brochure providing brief descriptions of natural features along the trail is keyed to numbered posts along the route.

Picnicking: Picnic tables and barbecue grills are located at six sites along the reservoir’s shore.

Boat Launch: The boat launch ramp is located on the north shore of the reservoir. When the reservoir level drops during the summer, boats must be launched from shore.

User Fees: Fees are charged for day use, camping, boating and the group area. A current fee schedule is posted in the park.

Reminders: The fragile desert environment requires many years for nature to restore once the soil and vegetation are damaged. Rules have been established for your safety and the protection of the environment. To make your visit and the visits of others more enjoyable, please observe the following:

1. Operating un-licensed vehicles is not permitted. All vehicle operators must be licensed. Drive only on designated roadways.
2. Camping is allowed only in designated areas. Saving or reserving campsites is prohibited-even if prepaid.
3. Fires are permitted only in the fire rings and grills provided. Collection of firewood within the park is prohibited.
4. All plants, animals, rocks, minerals and historic artifacts within the park boundaries are protected by state law. Please do not remove, destroy or disturb these features.
5. Pets must be kept on a leash no longer than 6 feet.
6. Use garbage dumpsters provided. Do not burn or bury garbage.
7. Quiet hours in the park are from 10:00 p.m. to 7:00 a.m.
8. Practice Leave No Trace skills and Tread Lightly minimum impact camping techniques. 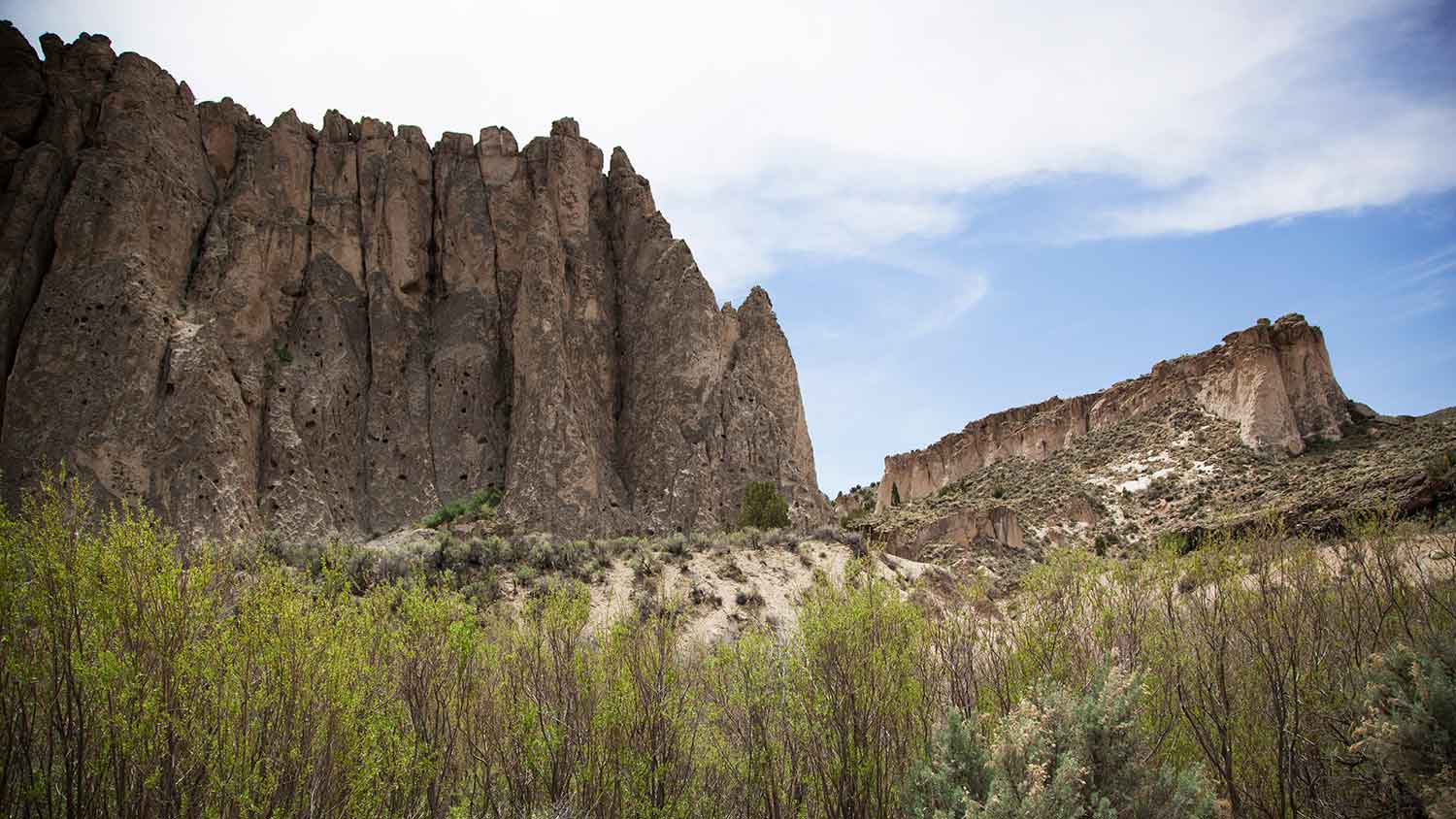 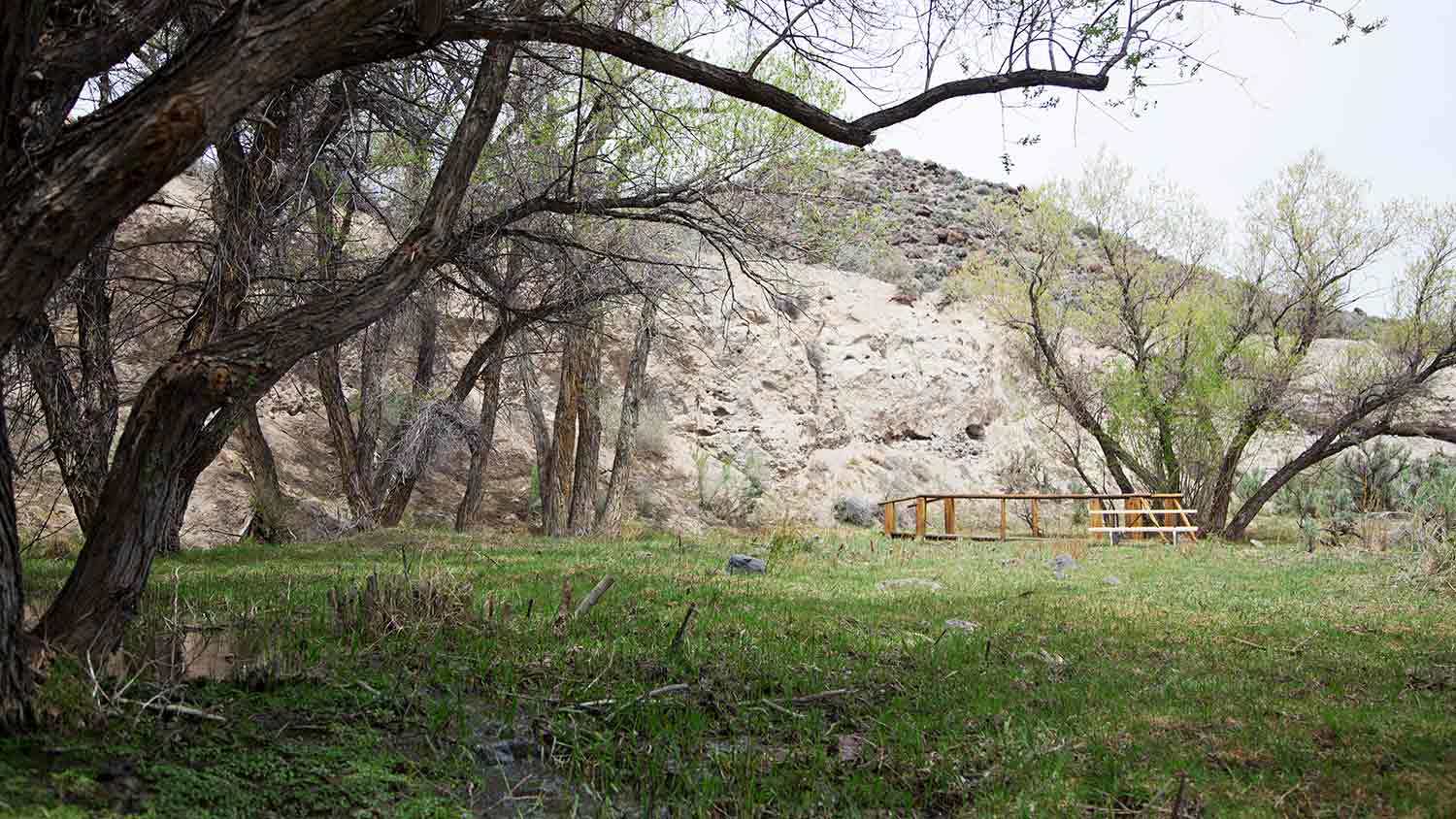 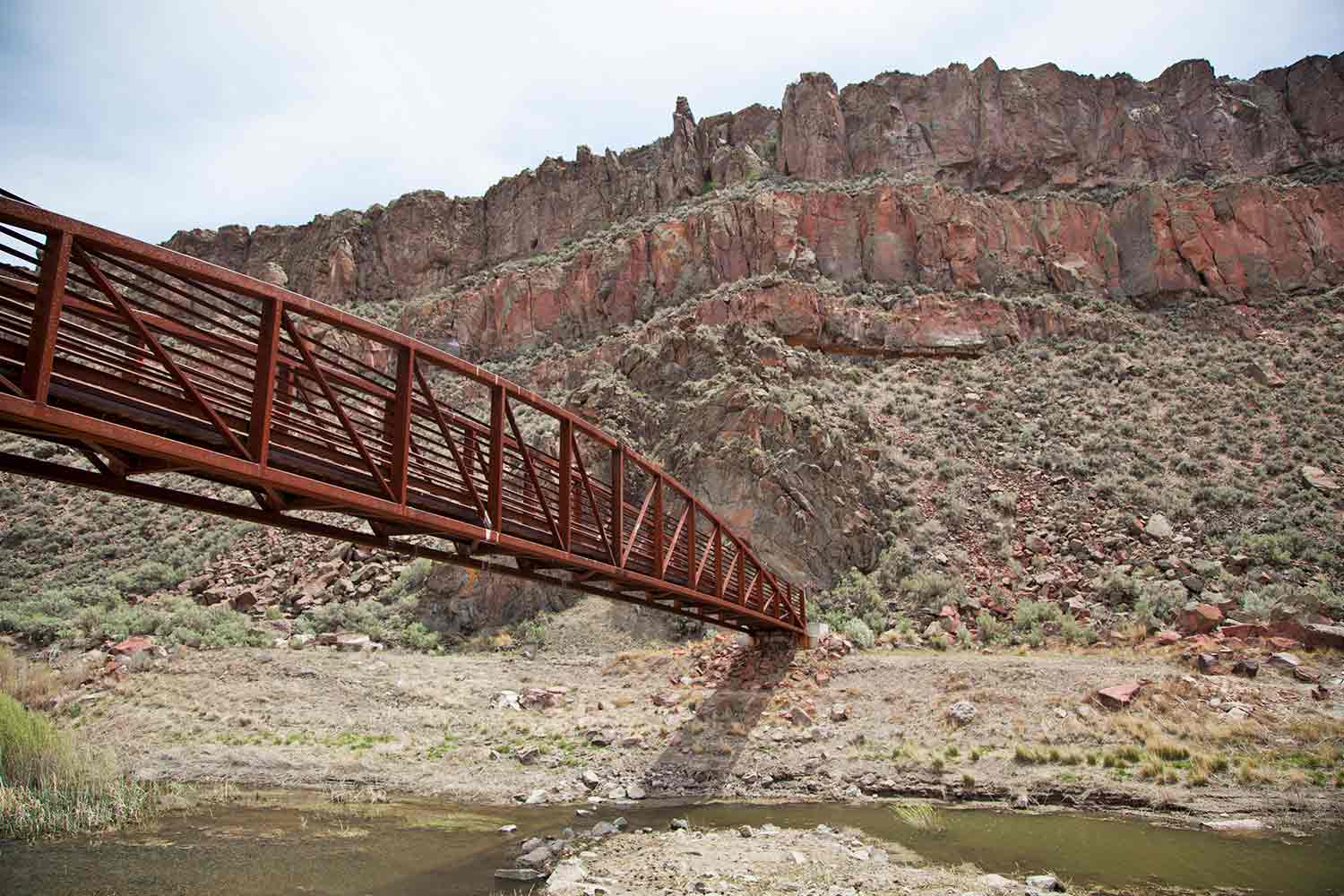 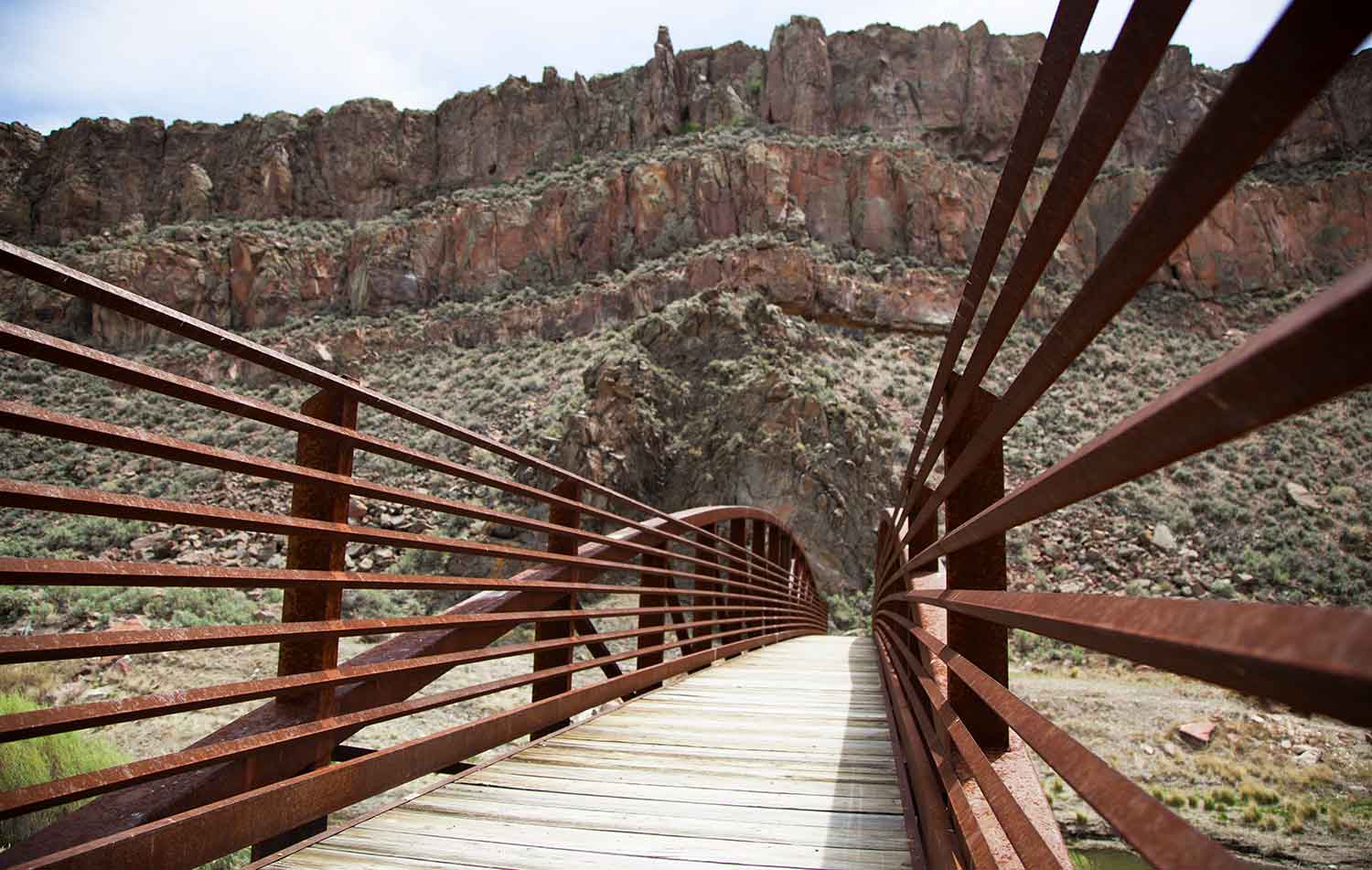 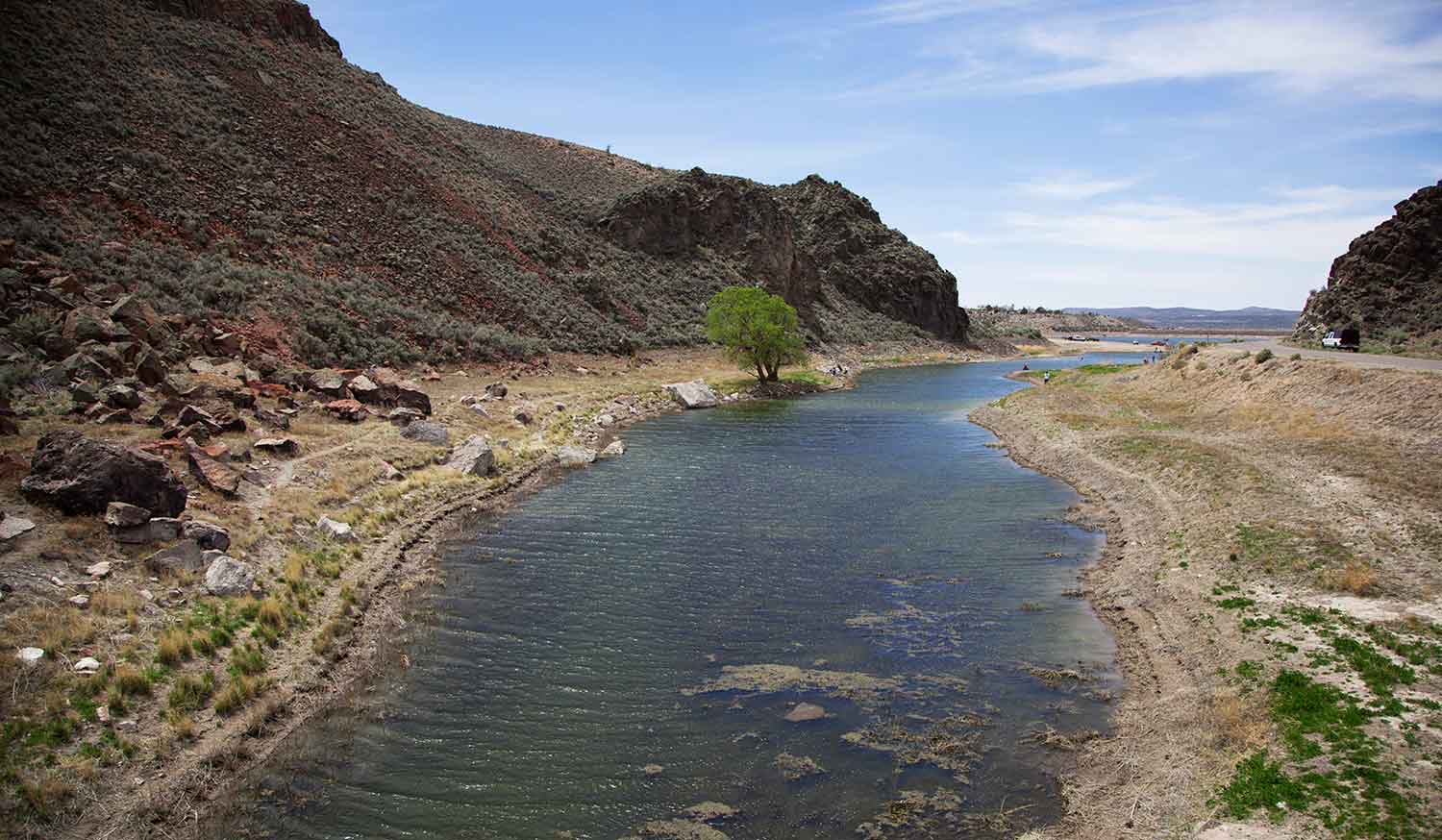 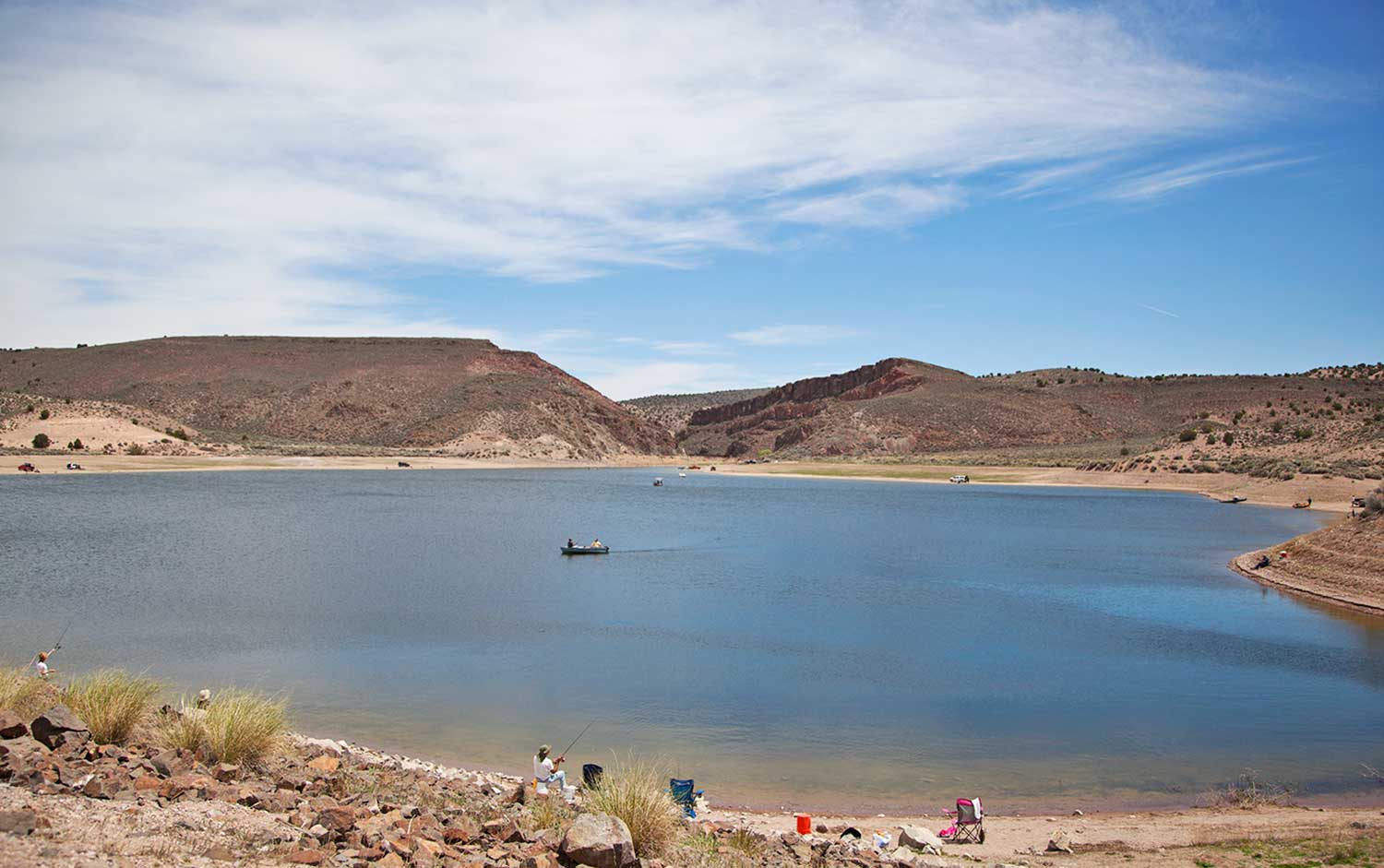 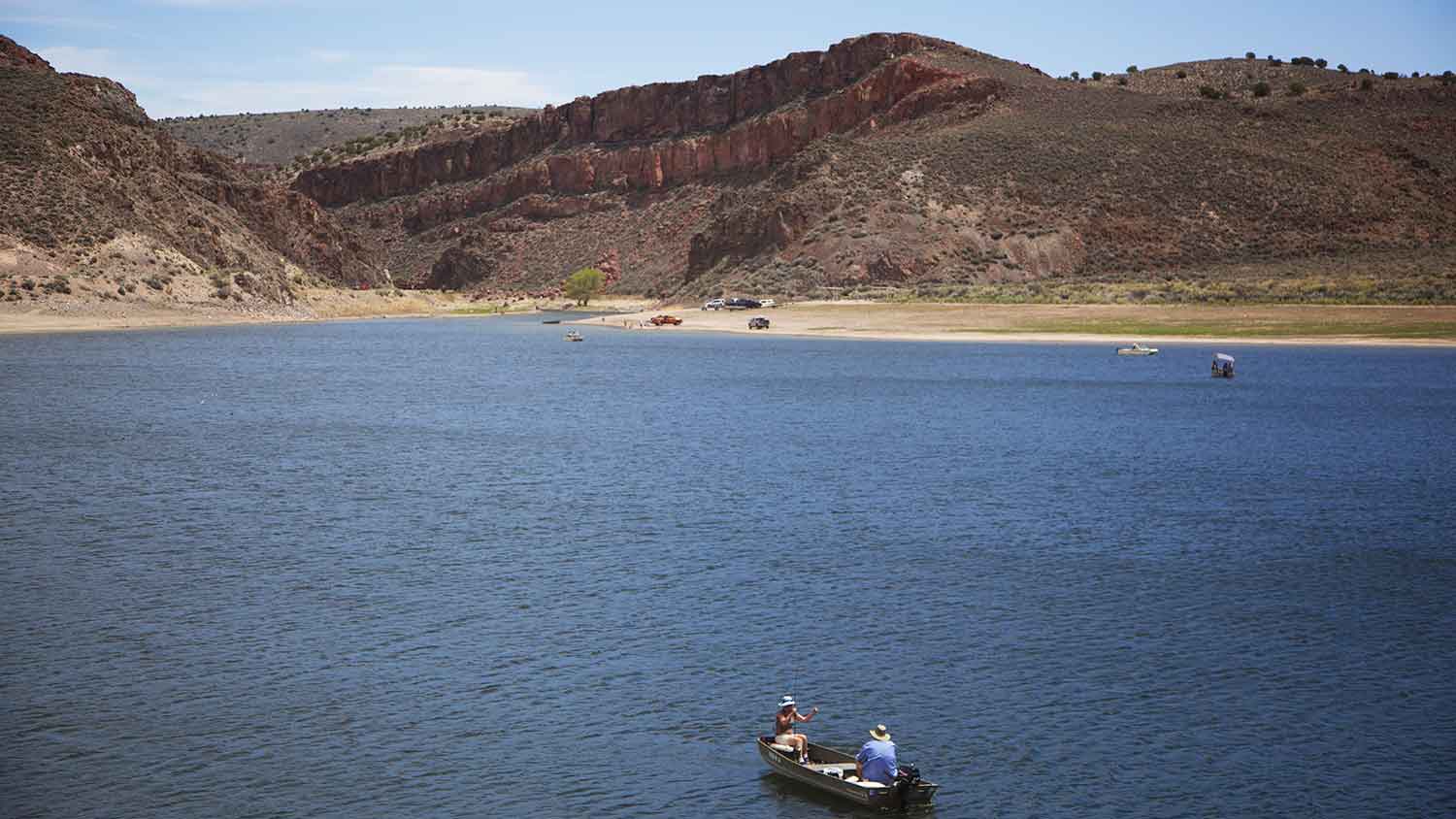 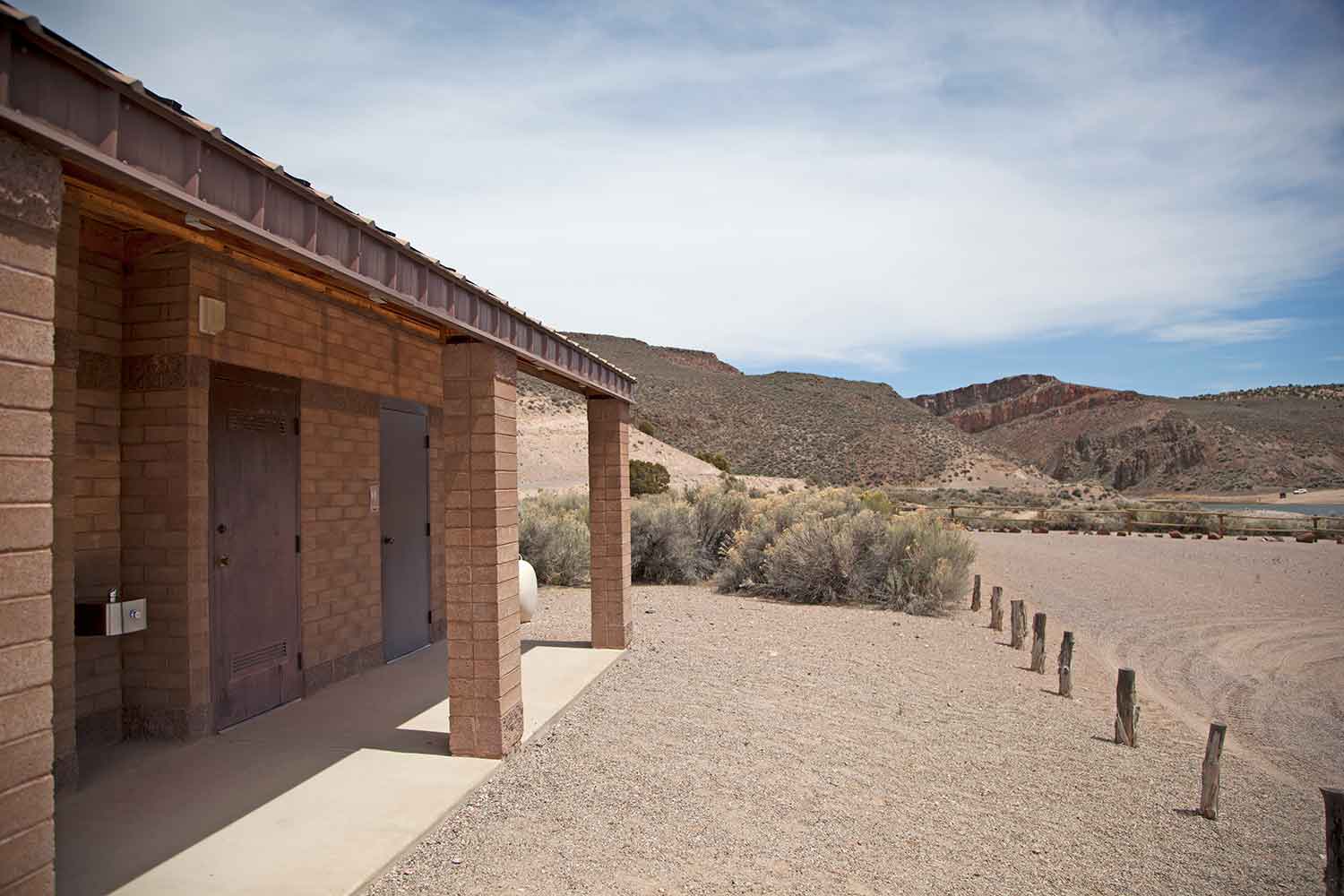 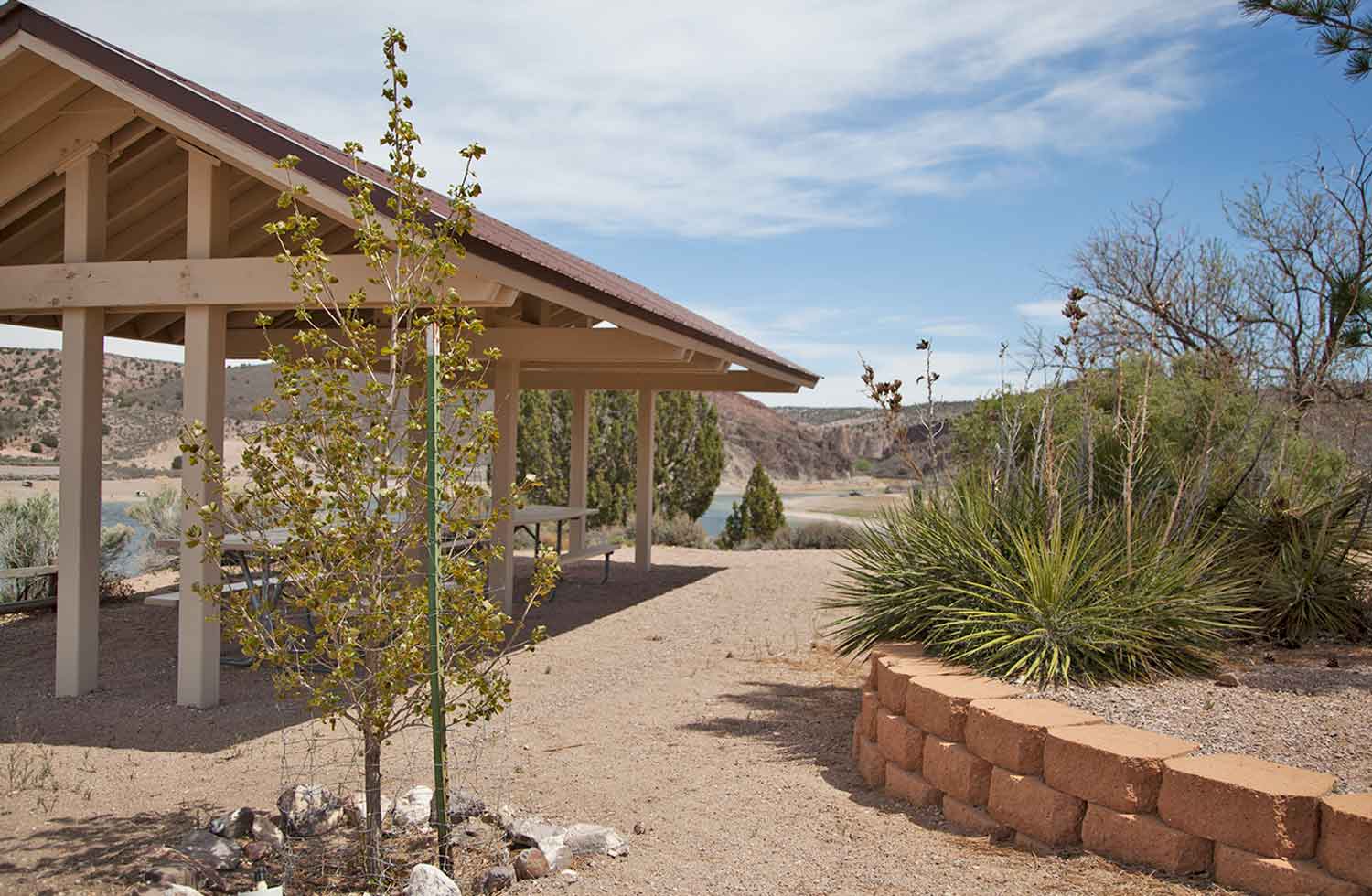 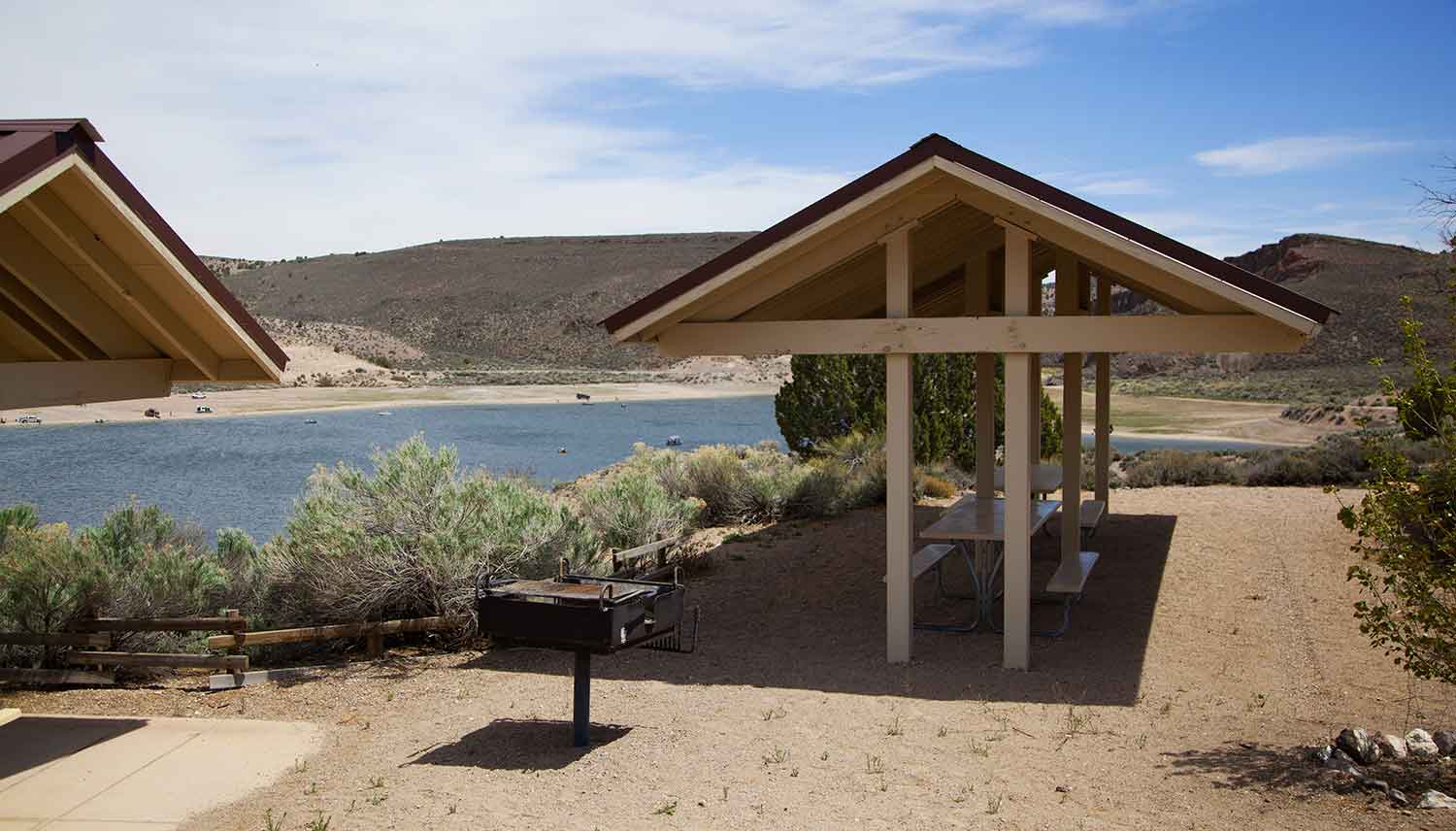